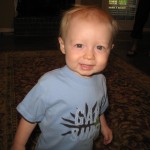 lessed I know to be able to play such an active role in the lives of our grandsons. Doris keeps the boys every day at their house while Josh and Jennifer teach school. Jon-Mical, who is 5, attends pre-k school across the street but Jakson, 2, stays with Mimi all day. This morning when Doris walked into their house Jakson jumped off the couch with a joyful smile and exclaimed, “Mimi’s home!”

There is an innate wisdom in little kids that we tend to forget as we get older. Somehow they recognize truth that eludes us in our later years. Jakson declared something this morning that we often ignore. Home is more about a presence that a place. It is more a state of mind that a physical address. For Jakson, if Mimi was there it was home. It really didn’t matter where she slept or kept her shoes. And believe me she has lots of shoes.

That means a couple of pretty important things. First it means that we are never outside of the Kingdom. Even on those dark and lonely nights when we wonder if anyone knows or cares, we are surrounded by the Kingdom. I wrote recently about a time that God was silent but not distant, when we felt alone but not abandoned. You are a Kingdom person and He is always there.

Paul says of that, “Christ in you, the hope of glory.” Jesus says, “Greater things than I have done you will do.” Jakson says of that, “Mimi’s home.”