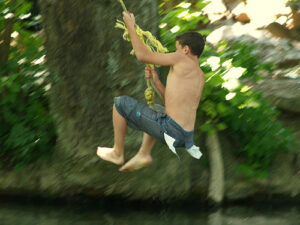 It is one of the great challenges of life, how long do I hold on and when do I let go? A few years ago we were fishing and swimming and just chillin’ at the little lake on my sisters farm. The kids, including my two sons were swinging on an old rope swing and dropping with a kerplump into the middle of the lake. In between every jump they yelled over at me, “C’mon Dad, you try it.” Now I am a wise, mature, solid thinking older gentleman so of course I got up and gave it a whirl. Amazing, exhilarating, a real adrenalin rush. And that was just climbing up on the platform so I could reach the rope. I grabbed this wet, muddy object of so much activity, took a death-hold grip and sprang out like a gazelle into the upper atmosphere somewhere just above the water and under the leaves of the trees.

Let’s leave our hero suspended in mid flight to discuss holding on. It’s not a bad idea. There are certainly some appropriate times and places to hold on. Walking along the rim of the Grand Canyon comes to mind. The handlebars of your sons Harley Sportster is another good place. I can think of a few more. When my grandson wants to get quickly from the car, across the parking lot to Toys-R-Us it is a good idea to hold on, tight. When my wife comes and sits on the couch next to me, even when it is the fourth quarter of the Titans and New York Jets, I have learned the hard way, that’s a good time to hold on.

In fact holding on is the stuff legends are made of. How many tales do you know of explorers that were ready to turn back but they held on a little longer? Or inventors that held on for one more experiment and then they broke through? War heroes held on against all odds. The rags to riches success models that we follow are all about holding on. Even scripture is full of admonitions to hold on. I Thessalonians 5:21 says to “Hold on to what is good.” Hebrews 10:23 says to “Hold unswervingly to the hope that is within us.” We grew up with Sunday School lessons and youth camp sermons about “holding on to Jesus.” And our favorite spiritual poster is that cat gripping desperately the end of a rope with some applicable Bible verse underneath and the caption, “When you get to the end of the rope, tie a knot and hold on.” You KNOW that is profound!

Holding on is just what we do. It is woven into our DNA. I give Jakson, my one year old grandson, a new toy and he holds on. Jon-Mical, the four year old plays in the evening outside in the tree house until he is so sleepy his eyes can barely stay open and his head drops, but he holds on. We hold on to jobs when they are less than fulfilling. We hold on to habits that we have promised to give up. We hold on to our kids long after they are out on their own. And we hold on to the false confidence that we can fix things when we know we can’t. My mother died this past week. I stood by her bed and held on probably long after I should have let go. On the other hand, she seemed to hold on until some special moment or circumstance that we can only guess, was in place. Holding on is as natural as breathing.

And speaking of holding on, what about the hero of our story suspended between earth and sky on the rope swing? We forgot about him. He (me) is still holding on. In fact that is exactly what I did. I held on while the swing made a glorious arc out over the beautiful, sundrenched lake. I held on as it paused for a moment, imperceptibly shifting directions, in that second free from the bonds of gravity. I held on as it started its rapidly increasing descent back towards the place from which it had come. And I held on while it whacked me against the muddy bank of the pond and then dropped me unceremoniously into the shallow, moss covered edge of the water. I lay there enveloped in slime, breath knocked out of me, hand throbbing (found out later it was broke), thinking to myself, “Self, you held on when you should have let go.” And there’s the rub. When do I let go?

Well the bad news is, I don’t know. The good news is you do. You know if you listen to the heartbeat of God, if you tune your desires to the Holy Spirit, if you take on the mind of Christ, you will know when it is time to let go. You will recognize that sometimes letting go is not only the best thing to do. It’s the only thing. You will understand that if I have any hope of holding on at all I am going to have to let go. There will come a time when you will see that holding on is going to cause more pain and letting go will bring freedom. Does that make sense?

Let me give you three times that come to mind when letting go is better than holding on. First, when you are holding on to hurt. We have all had those moments when we have been so wounded, so unjustly treated, so betrayed that the anger and hurt of that seems to hold on to us as much as we hold on to it. We process it, rehearse it, relive it, analyze it. We hold on to it, sometimes rightly so, to make sure it will never happen to us again. My wife speaks often to other wives who have been betrayed by their husbands. Doris will say to them, “You have to forgive but not today.” There is a benefit is holding on to hurt for awhile to help you establish boundaries and keep yourself safe. But….there comes a time, and you know it, when holding on to that thing is strangling you. The death grip you have on that perceived wound or unfair treatment is really a hold around your own heart. You HAVE to let it go. The situation may not be completely resolved. You might not feel fully vindicated. You may not have received the full apology that you desired. But it is time to let go and move on. Holding on any longer will only create more hurt and rob your life of joy.

The second time to let go is in a relationship that has become toxic. Listen, there are people that I have loved that in the long run were so unhealthy for me I had to let them go. We’ve all had those, an abusive father, a controlling mother, a legalistic church, a wayward child. Now I don’t mean for any of those that we desert or abandon them. God is a God of reconciliation and Paul says He has given us “the ministry of reconciliation.” We never stop loving. Never stop praying. Never stop believing that God can make things right. But there comes a time when we do that from a distance. When that connection with a sick person is beginning to make me sick too it is time for me to let go. God hates divorce. Our kids will always be our kids. We are to honor our parents. I don’t know exactly how all of this plays out but I do know that in some relationships there comes a time when the right thing to do is to let go. (And trust God!)

Which leads me to the third time of letting go. We did it this week. It was not easy. Still isn’t. As my family stood by the hospital bed of my mother who had battled for so long, it became apparent that the time had come for us to let go. My sister whispered to her, “Mom, to be absent from the body is to be present with the Lord.” In one way or another Mom had given each one of us that last smile and tender goodbye. She was ready and we, as much as we would like to have had one more day, or one more minute, knew it was time to let her go. And you know what? When we did God reached down to her and said, “Here Nanny, Take my hand and hold on.”

← She’s There Now
The Ministry of Presence →

3 Responses to Holding On, Letting Go