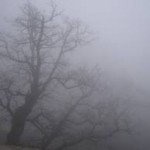 Carl Sandburg wrote the little diddy, “The fog comes on little cat’s feet and sits looking over the city on silent haunches, and then moves on.” I have no idea what that means but I do know what it is like to have the fog setting right down over me and to pray that it would move on but it doesn’t. I have been in an extended season of fog. This summer, actually, this entire year has been a year of unceasing heaviness, unending crisis, and mind-numbing burdens. Don’t get me wrong. I would not take back one minute. Every heavy moment was a chance to minister to and love on people that were very precious to me. But the cumulative effect has been a weariness and exhaustion that doesn’t end with a good night’s sleep. It is a fog that hovers, wisps in and out but never fully disappears.

Counseling, administration, development. These tasks have been done only with the greatest of effort and the minimum effect. I have spoken to groups out of the slim reserves of emotional grit. And writing, well, writing has been completely nonexistent. The stress and strain of this summer has been as overwhelming as anytime I remember. The fog has come to stay.

Perhaps you have known those seasons, those weeks or months of demand and despair that seem endless and empty but could not be escaped. Caring for a dying loved one, dealing with a failing marriage, praying over a wayward child or a waning business. Pastors, parents, and people of all walks have lived in the fog.

So what do you do? How do you survive those days when all there is to do is survive? I have always loved Paul’s admonition in Ephesians 6:13 “Therefore put on the full armor of God, so that when the day of evil comes, you may be able to stand your ground, and after you have done everything, to stand.” Sometimes to still be standing at the end is about all we can ask for. In fact, forget standing, I’d settle for curled up on the corner of the couch in a fetal position with one eye open and still breathing. The fog of life makes even that feel like an impossible goal.

Well, I’ve remembered a few lessons during the fog that might be beneficial. Here are some ways to survive the fog (I think). First, keep moving. It seems to me that the things that get in trouble during the fog are the things that stand still. Ships wash up on the rocks. Cars get rear ended.  People get jogged down! When we were living in Mt. Vernon a friend of mine was jogging in the early morning hours and it was blindingly foggy. He said he heard somebody running behind him so he stopped and a lady jogged right into him. You can get jogged when your fogged. The point is, you can’t stop. Just keep making progress. Put one foot in front of the other. The recovery community calls it “doing the next right thing.”

During this season with mom there were times I wanted to just pull down the sails, batten the hatches, and hide below the deck. But that would have only allowed fear and doubt and anger to catch up so I just kept trying to keep moving, another meeting, one more counseling session, my devotions one more morning. When you feel fogged in don’t just sit there. Keep moving.

But, the second thing I remembered was to move SLOW. The fog is not the time to race ahead, barrel around corners, or make sudden changes of direction. The fog requires slow, careful, prayerful movement. Movement but not much movement. This is not the time to change career paths, decide about relationships, or write your will. If all I can see is the fog I’m probably not going to make a good chose or wise decision. I move but I move slowly.

Josh was in the 9th grade and we let him go to a friend’s New Years Eve party. I picked him up shortly after midnight and was driving him home in my Jeep on another horribly foggy night. Going too fast on a country road that I didn’t know well enough, I knew we were approaching a T in the road where our road came to a dead-end onto another road. Josh and I were talking when he said, “Dad, was that a stop sign that just whizzed by?” Slammed on the brakes. Slid around backwards into the front yard of a house where all of the people were out on the front porch singing Auld Lang Syne. I put it in 4-wheel drive, Josh and I rolled down the windows and said, “Happy New Year” and then drove home. I remember now that when the fog is all around me, I need to go slow.

Here’s the last thing I remembered in the fog. Carl Sandburg was right. It does move on. It may feel like forever. You might think this fog will never lift but it will. Everything comes in seasons. Even the wise man said, “There is a time for everything, and a season for every activity under heaven: a time to be born and a time to die, a time to plant and a time to uproot, a time to kill and a time to heal, ….a time to weep and a time to laugh.” (Ecclesiastes 3) This fog will not last. God loves you with an everlasting heart. He works all things together for good. The Son will shine again and the fog will leave. I promise.

Doris and I got back this Monday from an amazing week away. We went to a cabin in the woods in Kentucky and did nothing. We took our Bibles every morning and sat out on the deck. The sunshine painted the trees with gold and crimson. The deer and turkeys slipped out of the woods and sipped from the pond that was not too far from where we were sitting. The ipod played soft worship music. And the fog left. God is faithful. Listen to me. God is ALWAYS faithful. And this season of your life will pass. “I lift up my eyes to the hills—where does my help come from? My help comes from the Lord, the Maker of heaven and earth. He will not let your foot slip—He who watches over you will not slumber…nor sleep. The Lord watches over you—the Lord is your shade at your right hand; the sun will not harm you by day, nor the moon at night. (Nor the fog anytime) The Lord will keep you from all harm—He will watch over your life; the Lord will watch over your coming and going both now and forevermore.”  Psalm 121

So don’t get fogged down. Go slow but keep moving. And if you hear me running behind you, just move over.        Mike

18 Responses to The Fog