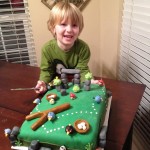 We celebrated Jon-Mical’s birthday this weekend. He turned 5 on Friday. It was an Angry Bird affair with Angry Bird banners, Angry Bird paper plates, Angry Bird napkins and even a big green cake with towers to knock down, a slingshot to use, and a fierce red cardinal glaring up from the middle of the cake. Angry Birds all over the place.

One of the characteristics of the person trapped in an addiction is that they are angry birds. Now addiction in that last sentence can be chemical or non-chemical addictions. It can also be codependency, unforgiveness, shame, or bitterness. Almost anything that has a strangle hold on our hearts produces some level of anger that seethes beneath the surface and dictates our response to the world. We may be depressed. We may be apathetic. We may rage. We may obsess over some past grievance or perceived injustice. But at its core, all of those responses are expressions of anger.

And like the mean little feathery missiles in the game, anger is often destructive. It just knocks stuff down. It flattens our relationships, bowls over or peace, and demolishes our joy. This kind of pervasive anger damages us and all those around us whether it is boiling behind the scenes or flashing in full view of everyone. Anger like Angry Birds smashes everything in its path. And that’s no game.

Don’t misunderstand. Not all anger is like that. There is a place for healthy, honest emotion. Paul says, “Be angry but don’t sin.” Jesus demonstrated righteous indignation. The difference is in what we are angry about. When my anger is focused on an event, an action, even a person that is current and immediate it is most likely a natural reaction to a hurt or a defense against an attack. I get angry because Jacob borrowed my golf clubs and didn’t bring them back. I get mad because the taxes on my paycheck keep getting higher. I get heated because the Lord is being dishonored on the radio. It’s here. It’s now. And I express my anger (hopefully in a healthy way) and then move on.

But when my anger seems to come out of nowhere and be focused on something or someone that is pretty insignificant to the anger, then something is wrong. A few weeks ago Doris and I were having a disagreement about a pretty meaningless thing when she asked, “Are you angry at me?” To which I replied, “Yes, and I don’t know why.” That kind of anger is coming from somewhere deep inside me and needs to be dealt with. I believe it is a symptom of a hidden “hurt, habit, or hang-up” that is still lurking around.

Step 1 of the 12 Steps says, “We admitted we were powerless over our addiction and our lives had become unmanageable.” We will talk in the days ahead about how to deal with this residual anger but the beginning of healing is to admit it is there. Start looking at yourself and your situation and asking, “Is this an appropriate response? Do my emotions match the gravity of what’s going on here?” If I recognize that I am angry about more than the moment then I need to admit there is something that is controlling me and of which I need to be set free. The start of the process is to admit to myself, to God, and to someone else that I still have some work to do. Just tell the truth about what’s going on. It’s a much used verse but a true one; “You will know the truth and the truth will set you free.”  (John 8:32)

So here’s the challenge for this week. Watch your responses. Look at your emotions. And see if you’re an Angry Bird. If you are admit it and let’s work on it together. Now, excuse me while I give in to one of my many addictions. I’m going to have a piece of Jon-Mical’s birthday cake.

(Join us every Tuesday at www.branchesblog.com as we learn the lessons of recovery